Please enable JavaScript to use this site.

This Event has already passed.

Author and Travel writer Paul Theroux will share his inspiration about the Hawaii surf culture novel "Under the Wave at Waimea" with Spokesman-Review's Rob Curley at 7 p.m. on  April 15 . 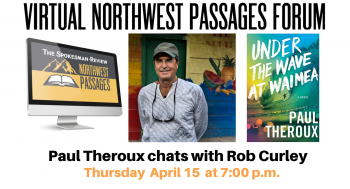 Prolific writer Paul Theroux (‘The world’s most perceptive travel writer’--Daily Mail) is the author of many highly acclaimed works of fiction and nonfiction, including The Great Railway Bazaar (1975), The Mosquito Coast (1981) Riding the Iron Rooster (1983), and Mr. Bones: Twenty Stories  (2014). In 2015, Paul Theroux was awarded a Royal Medal from the Royal Geographical Society for “the encouragement of geographical discovery through travel writing.” This award, approved by the Queen, is the highest award attainable for a traveler, and Theroux joins the ranks of recipients including Sir Edmund Hillary, Admiral Richard Byrd and Dr. Thor Heyerdahl.

Share This Event!
When and Where
Apr 15, 2021 from 7:00 PM to 8:00 PM PDT
Re-send Order Confirmation
Click here to re-send your order confirmation email.

Check out our FAQs, or feel free to contact us.

I have a question for Customer Service about an event, tickets, or orders.

I have a question for Tech Support about a technical issue with the site.